For reasons yet to be explained, yesterday I found myself on the steps of the Bombed Out Church in Liverpool yesterday demonstrating to former-Pele and current Amsterdam frontman Ian Prowse the chords to my song Holly.

It’s currently 10 to 1 in the morning. I’m in a horizontal position on a futon in a suburb somewhere outside of Manchester. Gorton? I think it’s Gorton.

The room I’m in is one that was been laid out for the specific purpose of peace, self exploration and enlightenment. It’s a religious kind of room. There are prayer mats and candles. There is a photograph of a guru.

After missing my train back to Liverpool, a kind man offered me this spare room as lodgings for the night.

He is a most religious fellow and a bloody good musician. He assured me earlier on in the taxi home that he didn’t plan to convert me. I’m much obliged. He had a song called ‘Cool To Be Kind’. I like people like this.

He has a job interview in 9 hours and I am crossing my fingers he gets it.

I’ve just had a fantastic night at The Whiskey Jar Open Mic hosted by living legend Joe Mcadam, where I was a prebooked guest.

The best (certainly the most novel) aspect of Joe’s open mic is his merciless demands of the audience that they be quiet during artists’ performances.

I’m putting it quite politely; he really tells people to shut the fuck up. It’s outwardly fierce, yet this approach betrays a heart of gold and a heavy passion for music.

Some terrific musicians on display tonight.

My set seemed to go down well; Oh Rocko, followed by a cover of Couldn’t Love You More by John Martyn and finishing with Daisy. People came up afterwards and remarked upon it with genuine and sincere enjoyment. I am completely useless with compliments about my music and generally tend to say things like “thank you” (sheepishly) or “that’s very kind of you”. But all in good fun!

Having bought a big sod off double bed this week but not had time to put it together I am quietly grateful for this opportunity to get some shut eye in a tranquil room such as this one. So here it goes. 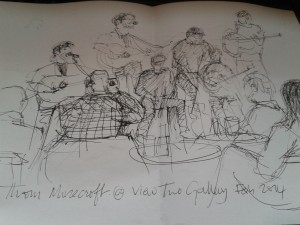 Hosted by the infamous Southbound Attic Band, the Acoustic Dustbowl is a twice monthly live acoustic event held at the View Two Gallery on Mathew Street in Liverpool.

Last night, with my band The Rhythm Section, I featured at this month’s first, supporting a fantastic group called The Good Intentions.

One of the great things about playing at the View Two is that Ken, the gallery owner, tends to draw pictures of the groups and artists he really likes.

Over-Rehearse, Under-Rehearse – The Search for the Just Right Music Porridge

Yesterday I learned, or re-learned, a valuable lesson.

Which is: do not turn up to a rehearsal with musicians playing with you for free and proceed to play the same two songs for an hour and a half. Particularly when one of them only really needed the intro clearing up a bit.

No matter how much you like your own material, hearing it over and over again and steadily growing more sick

That said, the other recent practices have been so enjoyable it’s hardly felt like work at all, and the new songs coming together for the album are brilliant. What’s been profoundly shocking is how much of a great bass player I didn’t realise Adam Lewis was. I mean I knew he was good, but he’s even better really.

The New Single: On All Night

Last Friday I released my first single ‘On All Night’.

Described by the founding editor of Mojo Magazine Paul Du Noyer as “cheering and addictive”.

The video above was first shared by the makers TableTop film – please check some of their stuff out.

Launched on the day I supported Beans on Toast on The Shipping Forecast, while I was playing at The Gallimaufry in Bristol and then The Whiskey Jar in Manchester the video received over a thousand views in less than four days.